Last night, Junoon’s die hard fans were legit upset after coke studio released the highly-anticipated performance of Sayonee aka the all time favorite song of any Junoon fan.

Thanks to these guys!

Before we start, we’d like to say that you can’t Mix a Biryani with Pulao – or you’d ruin both of em. Just like that Rahat Fateh Ali Khan, Ali Noor, and Salman Ahmed are good in their own fields but mixing them for a cover song was a bad idea.

Now you know what we talking about!

Rahat Fateh Ali Khan is a living legend, and he did save the song couple of times from going off beat. But sir you should not turn a rock song into a classical.

Oh! and did anyone notice him? Yes! That’s Ustaad Aashiq Ali Mir, the original Junoon band member who has been playing tabla and dholak for Junoon in the studio and live performances for the past 25 years.  But Salman Ahmed still calls him “a guest musician”.

One of the best parts about this cover was Salman Ahmed sticking to what he does best – playing the guitar and not singing.

Here’s the reaction from Junoonis Worldwide. 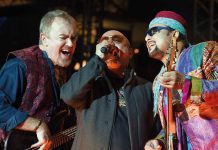 Party with the stars of ‘Main Tera Hero’ in Dubai